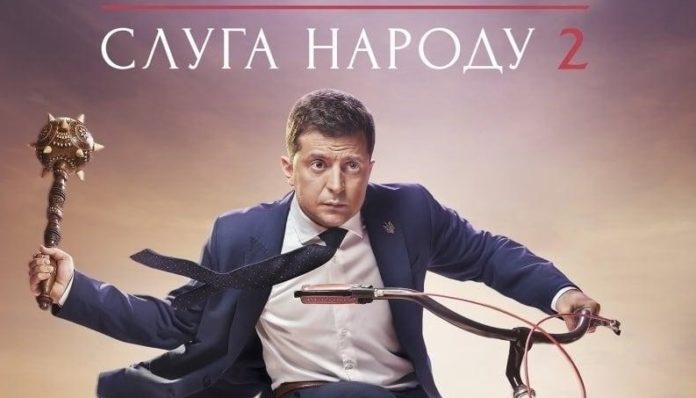 (―Indeed, the sucess of any bussiness, as someone said, rest on three pillars: diligence, honesty and fairness.

At this stage of the conflict, no one doubts that Volodymyr Oleksandrovic Zelenskyy is one of the main protagonist of the war in Eastern Europe. His public appearances dressed in military green, his gestures and the empathy he seems to project by the hand of those who follow his messages on a daily basis, have led half of the world to catapult him to hero status.

But who was Volodymyr Zelenskyy before he became the unexpected leader of Ukraine’s resistance to the Russian invasion? As you may have read in multiple articles that have flooded the media in recent days, Zelenskyy, before becoming President of Ukraine in 2019, was a well-known Ukrainian comedian, screenwriter and actor, especially for the series Ϲлуга Народу (Servant of the People), from which his candidacy for the presidency was born. Previously, he had participated in the Ukrainian version of “Dancing with the Stars”, which he won, and as a voice actor he had voiced over Paddington Bear, as well as taking part in a number of romantic comedies.

Zelenskyy was born a Russian speaker in Krivói Rog, in the centre of the country. He lived in Mongolia, graduated in law and, as laws did not satisfy him, began his career as a producer, comedian and scriptwriter in 1995 when he founded Kvartal 95 (named after his neighbourhood). It wasn’t until 2015, after participating in TV games, films of dubious quality and after openly confronting the ban of Russian artist entering the country, that Zelenskyy and his team began filming “Servant of the People”, which would later in 2018 become an eponymous political party. The rest is History.

Ϲлуга Народу: Servant of the people (We watch the first five episodes)

Since this political satire began airing on Ukraine’s 1+1 channel, it has been a huge success. It was initially available in several countries via Netflix, and the current situation of both Zelenskyy and Ukraine has rekindled the interest of several multimedia companies in buying the rights again.

Vasyl Petrovich Holoborodko (Volodímir Zelenskyy) is a high school History teacher. Or rather, a good high school History teacher if we look at the students he has. When in the first episode his students are ordered out of class to do construction work in the courtyard, Vasyl complains bitterly that it is always his History class that is affected, but never Maths, in a crucial dialogue that kicks of the plot of the series:

―I’m done here. Mathematics is… a science! History? A shit! And then we are surprised when our politicians come to power and make the same mistakes? Why? Because they are… mathematicians! All they know is how to divide, add and multiply their own wealth! (…) We have been choosing between two bastards for 25 years and you know what the most interesting thing is? That nothing is going to change this time! Do you know why? Because you, my father and even myself will choose a bastard again. And why? “Yes, he’s a bastard but he’s the least bad of all bastards”. Then those bastards come to power and they steal and steal and steal… they ave different names but they act the same way. And nobody gives a shit! Nobody gives a shit! You don’t give a shit! Nobody gives a shit! And it’s the biggest shit in this shitty world! If I had the power, at least for a week, I’d show you! I’d throw out their courtiers, with their bonuses, with their summer villas, with everything! I wish every normal professor lived like a president! I wish every president lived like a professor, damn it! And I’m telling you this as a History teacher and you don’t give a shit. Bastards!

While he is arguing, a pupil records his entire argument, full of insults and shouts, and dedices to upload it to the web, with the result that in two days 8 million people have seen the video and his pupils begin to ask him why he is not standing in the elections. Evidently, Holoborodko is not in the mood and starts making lame excusess, from the logical ones about who is going to vote for him if they don’t know who is, to the economic ones, because he has to pay 2 million hryvnas to be able to register a candidacy. Of course, all of the excusess are thwarted by the intriguing students who, in a turn of events, raise the money through crowfunding and force Holoborodko to start his political career. And win.

But we already know all this, since the high school scenes are a flashback to his first day on the job as president of Ukraine. And what a day! Receptions, shaking hands, practising speeches, getting to know his new home (The one built by Yanukovich which now is a museum in real life) the presidential palace, walking thought the marble that Marie Antoinette walked on, on the way to her beheading… All these images, superimposed with the flashbacks at the institute take us through almost 30 minutes at a dizzy, classic sketch rhythm that works to perfection.

Vasyl Holoborodko appears in the series as a honest person, very honest I would say, with great negotiating skills. Not only through his students but also in his relations with Yuri Chuiko, the prime minister and the president’s Jiminy Cricket; his head-on collision with his family, who starts thinking he is a failure, to end taking advantage of the situation; or in his relationship with his presidential subordinates.

The fiction works perfectly because it appeals to the quiet man with solid ideas who confronts, or wants to confront, the tyrants around him. Holoborodko is a nondescript guy whom everything seems to go wrong, yet his parents speak of him as “A lottery ticket we bought 37 years ago and we’ve finally won”. While Vasyl strives to reduce the absurd assistants of his government (such as the oyster farmer or the motivational speaker adviser), his family takes advantage of the 100% sales offered at a supermarket, tries to renovate their house by kicking out their neighbours so they can have a mini-golf and a swimming pool on the roof; or he takes the bus to work after rejecting a sumptuous limousine that appears in their backyard to take him to carry out his duties as a president.

The characters, as can be seen, are well defined: the profiteering family, a hard-working mother and a bumbling father at home, the clueless sister whose daughter lives with her grandparents, the effective and sober prime minister, who from the very beginning we suspect is involved in all the corruption plots that we will encounter, and the former president Serhey Pavlovich, an alter ego of Poroshenko (former real president of Ukraine) who locks himself in his office and refuses to transfer power to Holoborodko unless he is given a bottle of vodka, a pack of cigarettes and a house in Yugoslavia:

-But Yugoslavia no longer exists.

-He knows that. That’s why he asks for the bottle of vodka.

And how can we not empathise with good old Vasyl? As he tries to learn the Gettysburg Address with walnuts in his mouth in order to vocalise better, we realise that everyone around him is corrupt, that the dice is cast and that things are probably not going to end well for the professor-president. And that’s not to mention the men in grey who are still wondering who put such a character in charge, although if you think about it, he seems pretty malleable. But already at the beginning of the series (which has 51 episodes in 3 seasons plus a film) we see that Holoborodko intends to go it alone and deal with the real problems of his country, even if there is always some in the way. 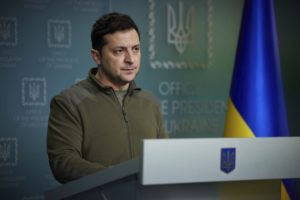 The huge success of the series prompted the creation of a party, Ϲлуга Народу (Servant of the People), in 2018 to try to oust the oligarch Poroshenko from the country’s presidency. Through a modern internet campaign, Zelenskyy managed to win 73 per cent of the vote, an unusual and unexpected figure that responded to public dissatisfaction with Poroshenko’s policies, which have led the country to be the second most corrupt nation in Europe, according to Transparency International.

Zelenskyy’s rise to power perhaps came as more of a surprise to international diplomacy than to the Ukrainian people. Fed up with corruption, the wear and tear of the constant war with Russia, and territorial pressures presaged a radical change in the 2019 elections, although what the world may not have expected is that an actor and scriptwriter could come to lead a strategic country condemned to conflict wit its neighbours.

But reality is always crueller than fiction. While Holoborodko, at least in these first chapters, gets his way even on minor issues (presidential speech, limousine, etc.), Zelenskyy began to clash with his parliament as soon as he took office, with proposals such as the reform of the electoral system, the dismissal of the foreign minister, the defence minister and security chief among others.

And the Russian bear woke up. We ended 2021 with Putin’s veiled threats about Ukraine and it was not until 24 February that they became reality. Before the escalation of tensions, Zelenskyy was not at his most popular moment and the Ukrainian president’s warnings were taken lightly until the Russian invasion.

Volodymyr Zelenskyy did not come to power through the vehemence of the protagonist of Ϲлуга Народу and contrary to what everyone might expect, he has remained in Kyiv, together with his compatriots despite at least three known attempts of murder having been thwarted to date. His speech is calm, austere and credible, and his way of communicating activates the empathetic centres of his viewers because, unlike Vasyl the wild “I do whatever I want”, Zelenskyy is taking a big gamble.

Tough the president’s interventions have a charged impact because of the way he communicates, there is one specifically that is revealing. While being questioned about the family and his daily routines, an aide informs him that an Holocaust memorial in Babyn Yar has been bombed. And that is where Zelenskyy abandons Holoborodko with body language that leaves no room for doubt. Still waters run deep, but here they are on the surface.

It seems that Zelenskyy’s popularity has not yet reached its peak and it is very likely that we will soon see Ϲлуга Народу on television in many Western countries, as they have already rushed to buy the rights to the series. In the meantime, it can be enjoyed in Russian on Youtube if, as our boss Alejandro Serrano points out: we don’t mind a bit of political pornography, because althought the series is a very good comedy that should make us think on power while we laugh our heads off, the truth is that the situation of the Ukrainian people is not much to laugh about.

The Walking Dead: A New Frontier